Get in touch
Menu

How the Church moved
mass online during a pandemic. 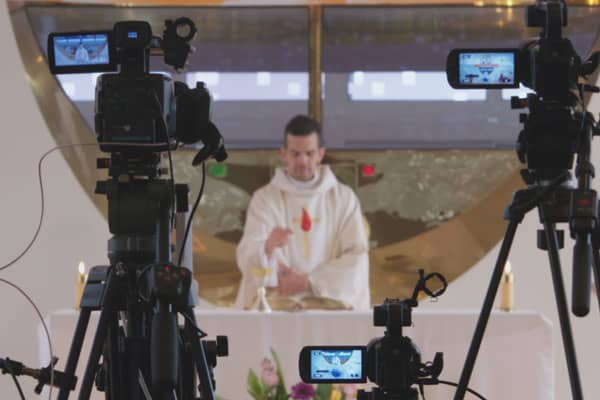 The story of how St. Benedict’s Church in Melbourne moved their mass services online during the COVID-19 pandemic. When statewide lockdowns were implemented, the church had to learn the business of live streaming pretty quickly.

During Melbourne’s first lockdown in 2020 I got talking to my neighbour who is an active member of the local church community.

He showed me a photo of his church and that they had replaced all the regular parishioners on Sunday mass with photos so the priest still felt like he was providing mass to an audience. He also told me they were doing “drive-thru confessions”. I laughed and thought that this was a bit wild but it did get me thinking that there were businesses and organisations all over Melbourne that were scrambling to still provide their services to the public, including this local Catholic Church.

I wanted to film what they were doing with the drive-thru confessions to show the creative ways people were handling the pandemic, as I found it very interesting but they had finished doing the confessions, I’m not sure why. They were now putting all their energy into live-streaming their masses, so I decided to film that.

The church hadn’t live streamed before and were finding their feet in the world of Youtube and had cobbled together cameras and equipment from some of their parishioners. They were rapt with having 50 viewers but that quickly ballooned to 1500. The church had found a new way of reaching their audience and not just that – had increased it during a pandemic.

I was also pretty naive to how much people of faith, catholic or not, had lost a big sense of community during lockdown. It was nice to see that the world of live-streaming, and video in general, was very much able to help bring that sense of community back to the public during a tough time.

After all, the best stories start
with a simple idea.

Why over-complicate the process? Get in touch with us, and let us tell your story.